Skip to content
Are you an unconscious competent or are you a conscious component – or are you somewhere in between?
Do you know why we sometimes ‘back-slide’ when we’re learning and then we beat ourselves up because ‘I should have known better’.
Did you know that learning is a series of 4 phases – and when you understand these phases, it’s a lot easier to learn more effectively?
And it’s a lot easier to be a better trainer / mentor for others.
Watch this quick video or read the transcript and learn all about learning. 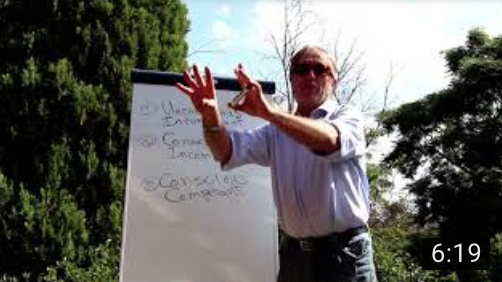 Let me ask you a quick question…

Do you know why so many of us beat ourselves up when we learn something?

We’ll learn something, we’ll get a little while along the learning path and then we start to beat ourselves up and say “You should have known better than to make that mistake again, etc.”

So, I’ll explain as we go through it.

The first stage of learning is the unconscious incompetent.

This is the person who doesn’t know what they don’t know. For this whole sequence of four learning phases I’ll use driving a car as an example.

An unconscious incompetent, may be the baby that’s seated in the backseat of the car. That baby doesn’t even know what a car is, where they’re going, or what driving is.

The next stage is the conscious incompetent.

Think of this person as the L-plate or learner driver. You’ve been an L-plate driver, I’m sure—or whatever L-plates are in your country.

You’re incompetent, you don’t really know what you’re doing, and you can just get by being really, really conscious about it.

These two stages are alright, there is no ‘danger’ here – as opposed to the next stage…

The conscious competent is the person who can do ‘it’ really well providing they think about it, and this is the danger period for us when we’re learning and when we’re training someone else.  Often Conscious Competents will regress and make errors.

This is the stage where we say “I should have known better, I shouldn’t have been so stupid”, and all those sorts of things.

And, this is where a trainer may come up to someone that’s learning and say “You’ve done that five times already you idiot! You should have known better than to get it wrong this time.”

And this when people kick themselves up the bum, hit themselves to the head both physically and figuratively, or emotionally—beat up on someone who is in this learning phase, and that’s the worst thing to do because all you do when you mentally or physically or emotionally beat up on yourself or on someone else is you drive their self-confidence down.

This is the stage at which they need the most support.

This is the stage to say “Hey look, we’ve been through that five times already, and you got it right those five times. The sixth time, you made a mistake, that’s cool. Just forget about the mistake and just go on with it.”

If you’re learning, be kind to yourself. Support yourself through this stage.

If you’re training someone else, be kind to them and help support them through that stage.

The fourth stage, you’ve probably worked it out by now, is the unconscious competent. Let’s go back to the car analogy.

This is the stage at which you can shave, put on your makeup, talk on the phone, drive, listen to the radio, send text or SMS messages—you’re hurtling in this one ton machine, or this 500 kilo machine—whatever your car is down the road at incredible speeds.

And then, ten minutes later you think, “Oh, that was my exit 5 mins ago.”, because you’ve been in dream land the whole time. But, you haven’t crashed because you’re unconsciously competent.

What To Do Now

I’m hoping that now that you understand those four phases and four levels of learning, that you can help yourself through those phases a lot more quickly and easily, and equally important, that you can support your team members through these stages.

Also, if you have kids at home, this doesn’t just apply to veterinary practice, this applies to life.

I’ll see you in the next video.